One evening in late 2015 I’m musing on how you get new people to come along to see a concert band. My husband says “food and drink – that’s what sells these days” and the seed for the idea that will become Hornblower is planted…

This isn’t a new idea. Bellowhead teamed up with a brewery to create “Revival Ale”, you can buy Iron Maiden’s “Trooper” in supermarkets and I’ve had a pint of the Stereophonic’s own beer one night in the Eagle and Child. So why not an Abingdon Concert Band beer?

I love it when a plan comes together

Fast-forward to 2016 and we are starting to think about the band’s 40th anniversary the following year. The beer would be a great way to mark the occasion but how do you go about getting your own beer made? Initial enquiries with a larger brewery weren’t promising as they dealt in volumes too high for what we wanted. “How were we going to sell it?” they asked. A good question that led me to contact The Nag’s Head in Abingdon which has previously been a CAMRA Pub of the Year. Minutes after sending an email I have manager Kevin on the phone. He thinks it is a great idea, I get a crash course in brewing and most importantly the phone number of Jim Southey who runs a microbrewery in Milton called LoveBeer…

Abbey Brass were, like us, formed in 1977 so we’ve already planned joint anniversary events with them. Myself, Lucy (ACB chair) and Keith from Abbey Brass have our first meeting with Jim – in The Nag’s Head, obviously. Jim can brew the quantities we need, Kevin can have the beer on draught for a couple weeks next summer. The Nag’s Head has a lovely large beer garden – why don’t both bands come and play there during those weeks?

It’s a dirty job but someone has to do it

You can’t just brew a beer and put it out there. You have to taste it. In fact you have to taste a few different ones. Several times to be really sure. A few days before Christmas and fresh from carolling at Milllets Farm that afternoon a small group of Abingdon Concert Band and Abbey Brass players locate to The Plum Pudding in Milton. This is Jim’s local and the landlord Jez has very kindly put the three test beers on draught. Pioneer is a British hop, Aurora a Styrian hop from Europe and Liberty a US hop. Pioneer is the lightest, Liberty the most hoppy and Aurora sits nicely in the middle. After sampling all of them – and then treating the pub regulars to a few carols – it’s already looking like we have a contender in Aurora. However, you don’t want to rush into these things so we plan in another tasting session for the new year. 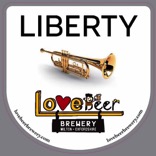 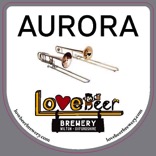 What’s in a name?

At the start of 2017 we launch the Name Our Beer competition. Entries flood in from the two bands and members of the public. Jim and Kevin choose their top 3 but some other entries deserve mention here – “DC Ale Fine” and “Oboe and Out” being my personal favourites. Our second beer tasting event had help to get the creative juices flowing. Held in Abbey Brass’s rehearsal room on a rather chilly January night it turned into quite a party with local band BMW coming along to provide the music. The votes rolled in and Aurora was announced the clear winner – we had our beer.

Although named Aurora during testing our final beer is actually made with pale malted barley and has three hops: Aurora and two British hops.

And the winner is

Final votes for the name are cast in March by the audience at Abingdon Concert Band’s spring concert and added to the votes from the two bands. Horn of Plenty took third place with 35 votes, Bugler’s Best second with 48 votes and Hornblower won it with 50 votes.

Now we have a name the designers get to work on our pump clip which will also be used for the labels when we bottle the beer later in the summer. 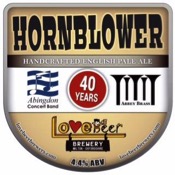 A sunny afternoon in June and the Thames-side beer garden of The Nag’s Head is packed. This is the first of three concerts and today both bands will play. It’s very exciting to see our Hornblower beer on draught for the first time and Jim and Kevin are both able to join us for the celebrations. A great afternoon is had by all with beer and music both going down well. Two more concerts follow and the Hornblower completely sells out! 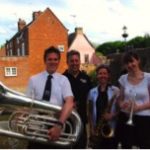 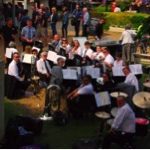 July is the joint concert for the two bands and LoveBeer have provided some more Hornblower for the occasion. The beer has also now been bottled and our commemorative pint glasses are available so we do a roaring trade in these during the interval. So much so that a second batch needs to be brewed to meet the orders from the band members.

Last orders at the bar

Abbey Brass take delivery of the pre-orders of bottles and glasses for the two bands. I test out the suspension on a Polo collecting Abingdon Concert Band’s share. The Hornblower story comes to a close – or does it? LoveBeer have already been asked to bring it along to the Swindon beer festival next month so it seems to have taken on a life of its own!

With huge thanks from Abingdon Concert Band and Abbey Brass to LoveBeer and The Nag’s Head for all your help and support with the Hornblower project.